THE ORIGINAL LONDON OF DICKENS AND SHAKESPEARE
GUIDED WALKING TOUR

FOLLOW IN THE FOOTSTEPS OF
WILLIAM SHAKESPEARE AND CHARLES DICKENS

On this walk Richard will take you on a fascinating journey through streets, alleyways, inn yards and riverside paths that were well known to both Dickens and Shakespeare. 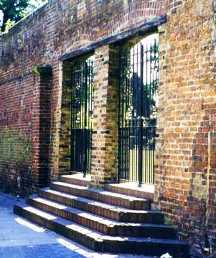 The London of Dickens and Shakespeare walk begins amongst the "ghosts" of Dickens troubled childhood with a visit to the remains of the Marshalsea Prison. It was here that Dickens father, John, was imprisoned for debt with the result that his young son's childhood was brought to an abrupt and traumatic end.

You will stand by the surviving wall of the debtors prison and picture the young Dickens being told by his father that the sun had set on him forever.

You will hear what Dickens had to say about the prison when he later used it in Little Dorritt, and you will discover the mix of emotions he encountered when, as a successful author, he returned to the very spot on which you will be standing to be confronted, once more, by the place that had haunted his imagination since the age of twelve.

The tour then moves on through a series of twisting alleyways and backstreets to reach a tranquil Victorian garden that often proves a total surprise to those who discover it on Richard's walk.

The garden was the gift to the poverty stricken 19th century residents of this neighbourhood from one of the greatest philanthropists of the age - a lady who, as a child, had met Dickens and who was greatly influenced by him.

Here, you will have the opportunity to sit and consider what this area was like when Dickens knew it, both as a boy and as a successful and influential author.

THE CROSS BONES GRAVEYARD OF THE OUTCAST DEAD

Another surprise awaits you next as the tour makes its way to a recently unearthed graveyard that was once a burial ground for prostitutes and paupers.

This section of the walk transports you back to the age of Shakespeare and introduces the Bishops who oversaw the various brothels for which this part of London was renowned throughout the later medieval period!

You will hear what Shakespeare had to say about this intriguing ecclesiastical contradiction and learn of the humourous way he covered the paradox of brothel owning Bishop's in his plays!

On a more serious note, those who worked in the brothels were not allowed to be buried in consecrated ground and were thus laid to rest in this burial ground. Following it's closure in the mid-19th century, it lay forgotten and undisturbed until recent work on the London Underground network uncovered it.

The local populace were quick to adopt the final resting place of the long ago residents and have turned it into a shrine to the "Outcast Dead."

Having introduced you to this remnant of bygone London, Richard will allow time for you to inspect the colourful ribbons and the poignant memorials that the locals have tied to and placed upon the gates in memory of their forebears.

THE STREET OF INNS

From this delightful shrine, the tour will move on along what was once termed "the street of inns," on account of the number of coaching inns that once lined it.

We will step into several of the cobbled yards where, if you look closely, you can still see the scars left by the stage coaches as they rattled into these narrow old entrances, often scraping against the stonework as they squeezed their way into the inner courtyards of the inns!

It won't take a great leap of the imagination to picture those dusty travellers clambering down from the coaches, relieved, no doubt, that their journey is finally over

One of the old yards you will encounter is Talbot Yard, a true literary landmark, for it is the site of the famous Tabard Inn from whence Chaucer's pilgrims began their journey in the Canterbury Tales.

Here you will be able to view a n evocative series of old photographs that will allow you to, quite literally, peek back in time and see the inn in its heyday.

You will also see those bygone stage coaches clattering over the cobbles, and catch tantalising glimpses of the faces of their passengers and coachmen.

We encounter an even more breathtaking discovery next as we step through an old wooden gate where you will gaze up at the timeworn facade of London's only surviving galleried coaching inn - The George.

This place is a true time-capsule and many who discover it are amazed that such a slice of bygone London has survived into the 21st Century.

The George Inn has the honour of being mentioned (albeit rather briefly!) by Charles Dickens in Little Dorritt, and there is no doubt, for reasons that will be explained on the tour, that he actually did know this old place very well indeed.

The George is also typical of the type of inn at which the early theatre companies would have performed, and you will see how the layout of the old inns would influence the design of the early theatres.

WHERE DICKENS CAREER TOOK OFF

The next Yard along was the site of a, now vanished, coaching inn called the White Hart, which was mentioned by Shakespeare in Henry V1 and which features in a memorable scene in Dickens's Pickwick Papers.

Indeed, it was at the White Hart Inn that Mr. Pickwick met with one of Dickens great comic creations Sam Weller - the character that, more than any other, helped establish Dickens's literary reputation in the eyes of the Victorian public.

Richard will tell you of the difficulties that blighted the early stages of Pickwick Papers and of the tragedy that almost brought the entire project to an abrupt halt.

He will also treat you to some choice quotations that will demonstrate the wit and wisdom of Weller.

Next off, the tour heads for the underside of London Bridge where we descend a flight of steps that have long been known as "Nancy's Steps" on account of the fact that it was here in Oliver Twist that Nancy met with Mr Brownlow. The whole conversation was, however, overheard by Noah Claypole, with tragic consequences for Nancy. 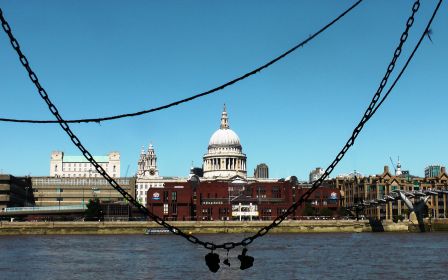 Here you will enjoy some truly fantastic views along the Thames, and you will also look across the River to see the likes of the Tower of London, St Paul's Cathedral and the City of London skyline spread out before you on the opposite bank of the Thames.

Richard will also tell you of the origins of the rhyme "London Bridge is Falling Down" and will reveal what it is that connects this to your mobile phone!

A JERKY TIME MACHINE OF A STROLL

From here we wend our way along the south bank of the River Thames on a jerky time-machine of a walk that criss-crosses the centuries to take in many notable local landmarks that date from all ages.

These will include the oldest Gothic church in London, where Shakespeare's youngest brother is buried; the 16th century riverside where we picture how it would have looked in Shakespeare's day; the remains of a medieval Bishop's Palace; and the spectacular replica of the ship on which the great 16th century seafarer, Sir Francis Drake, circumnavigated the globe.

You will also explore a wonderfully sinister looking old cobbled street where the Clink Prison - the "prison that gave its name to all others" - once stood.

THE SITE OF SHAKESPEARE'S GLOBE PLAYHOUSE

All this will bring us to one of the undisputed Shakespearean highlights of the walk, the site of the original Globe Playhouse. This is the sites where the words of Shakespeare first rang out in the 1590's.

Here, Richard will regale you with tales of the Elizabethan theatre and explain what it was like to attend a performance in Shakespeare's day.

You will learn about the various methods used to cross the Thames; and you will discover how, by today's standards, the audiences back then were a riotous, raucous and reeking bunch.

You will even have the opportunity to glimpse William Shakespeare through the eyes of those who knew him and hear how they described him.

A GREAT ENDING ON THE HISTORIC BANKS OF THE THAMES

Finally, by way of another suitably atmospheric alleyway, we reach an old stone stool where generations of ferrymen once sat waiting to transport people back across the River once they had enjoyed the delights of Elizabethan Theatreland.

The tour will end outside Sam Wannamaker's magnificent New Globe Playhouse where you can, if you wish, attend its exhibition, or even enjoy a spot of lunch.

And, throughout the tour, Richard will regale you with fascinating facts, entertain you with insights into the lives and times of both Charles Dickens and William Shakespeare and will sprinkle his commentary with quotations from both men that will help bring the past vividly to life. Indeed, it will almost be like walking around with them in their day!

Alongside The New Globe

When planning your journey to the start of the Dickens and Shakespeare tour, please allow 3 minutes for every station you will be through and then add 10 minutes to allow for any travel delays.

It seems unbelievable that thirty five years have flown by since I led my first walk through the London of Dickens and Shakespeare.

In those days the area looked completely different to how it looks today.

I'd lead my walkers over Blackfriars Bridge (I used to start north of the river then) and soon we'd be weaving in and our of the crumbling remains of dark, imposing Victorian warehouses.

The Bankside Power Station had just closed down and its towering bulk was looking for a new lease of life.

Who'd have thought then that it would be transformed into one of London's leading attractions - Tate Modern?

Sam Wanamaker had been battling for years to rebuild Shakespeare's Globe Playhouse as close to the original site as was possible.

It was his determination and sheer perseverance, in the face of great adversities and setbacks, that began the area's transformation.

That transformation has certainly had a positive impact on this wonderful quarter of London and I'm sure that, if you've never been here before, you'll love discovering it and, if you are familiar with the area, you'll learn things about it that you never knew about it when you join me on a Walking Tour of the London of Dickens and Shakespeare.

The Dickens and Shakespeare Tour can be booked as a private tour for your office social, tour group, or even as an outing with a difference for a group of friends or relatives.