Richard Will Be Dressed In Victorian Costume

Sunday February 7th 2016 sees the 204th birthday of Charles Dickens and, on this walk, we'll celebrate the auspicious occasion by venturing into parts of London that have remained relatively untouched by the advance of the years. 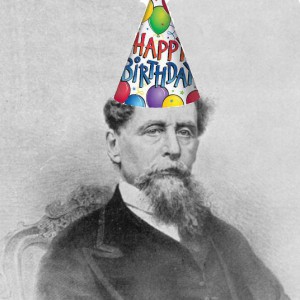 The walk explores a muddled maze of streets and courts that have changed little since Dickens knew them.

Indeed, so unscathed by time are they that, were Dickens to transcend the ages and arrive, dazed and blinking, in the 21st century, he would feel instantly at home.

That's how timeless these old thoroughfares are!

WE BEGIN DICKENS LIFE AT THE BEGINNING OF HIS LIFE

We will begin our Dickens birthday walk at the beginning of his life by picturing the young infant Charles entering this world on Friday 7th February 1812.

Ever after Fridays always had a special significance for Dickens, and Richard will highlight several examples of this in Dickens life and works.

We begin the Dickens birthday walk with a gbaled building that Dickens featured in his last, and his unfinished, novel, The Mystery of Edwin Drood and contemplate how little it has changed since Dickens's day.

From here we enter an historic hinterland to see buildings and locations Dickens that featured in the likes of Oliver Twist, Great Expectations and Bleak House.

Surrounded by buildings that could, so easily, be the backdrop for a Dickensian television serialisation, Richard will tell you how Dickens found inspiration in these magical places and how he based some of his most memorable caharcters on people he encountered as he strolled through these historic enclaves.

Having walked viewed the place where Dickens was living when fame first came a-knocking in 1836, the walk arrives at a sturdy old house that is still much as it would have been when Dickens featured it in Bleak House.

We'll even wish "Many Happy Returns" to a particularly splendid bust of the man himself that we pass en route to more of the medley of streets and courts with which this part of London is riddled.

A BROKEN HEART FOR HIS BIRTHDAY

Then, we're back amongst the real life ghosts of Charles Dickens youth as we join him on his 21st birthday when he decided that the time was right to make his true feelings known to Maria Beadnell, the girl with whom he had been besotted for several years.

Unfortunately, those feelings were not reciprocated and she, not only rejected him outright, but she also heaped insult onto his injury by dismissing him as a mere "boy", a put down that Dickens took very much to heart.

You will learn how her rejection of him became the catalyst that spurred him on and made him determined to make something of himself.

Indeed, it could be argued that, were it not for Maria Beadnell, the World may never have heard of the inimitable Boz - as Dickens himself may have remained the humble, jobbing journalist he was becoming at the time of their courtship.

The World, no doubt, owes a huge debt of gratitude to Maria, but we will pause to remember the heartbreak that Dickens endured as their relationship ended and we recall how, for many weeks afterwards, he would make his lovelorn way through the dark streets of London in the early hours of several mornings to gaze up, as he later put it, "at the place where Maria slept."

We lighten the tone next by dipping into the pages of Pickwick Papers to recall the hilarious scene when Mrs. Bardell misunderstood an innocent question from Mr. Pickwick, and, as a consequence, brought an action for breach of promise against him. The exchange between Pickwick and Mrs. Bardell's lawyers is pure comic genius and Richard will delight in re-enacting it for you.

Having guffawed at Dickens comic writing at its finest, we make our way to the gate where Charles Dickens, aged just fifteen years old, received a black eye courtesy of a "blackguard fellow."

Next up, we aim our footsteps for the glorious exterior of the Royal Courts of Justice where we gaze up at the building's splendid pinnacles and turrets, and contemplate how the area that surrounds them would have looked in Dickens's day.

By way of a stunning building in which Dickens in Bleak House, wrote of lawyers skulls being neatly arranged, within we find our way to the Old Curiosity Shop which, despite the claim emblazoned on its timeworn exterior wall, was not the one "immortalised by Charles Dickens."

Richard will regale you with the full, hilarious, story, of how the claim came to be made and will explain how successive owners have seen little point in interfering with a perfectly good "tradition".

Thus does the Charles Dickens Birthday Walk draw to its close, as Richard directs you to other things you might like to do in the area, but not before inviting the group to raise their voices in unanimous unison and wish Charles John Huffam Dickens a very happy 203rd birthday.

Outside Exit One of
Chancery Lane Uderground Station

Please remember that this an outdoor tour, so please be sure to check the weather forecast below and ensure that you arrive suitably dressed for anything the elements might throw at you!

When planning your journey to the start of the tour, please allow 3 minutes for every station you will be through and then add 10 minutes to allow for any travel delays.

The Tour can be booked as a private tour for your office social, tour group, or even as an outing with a difference for a group of friends or relatives.