Being A Ghostly Tour For Saturday Nights 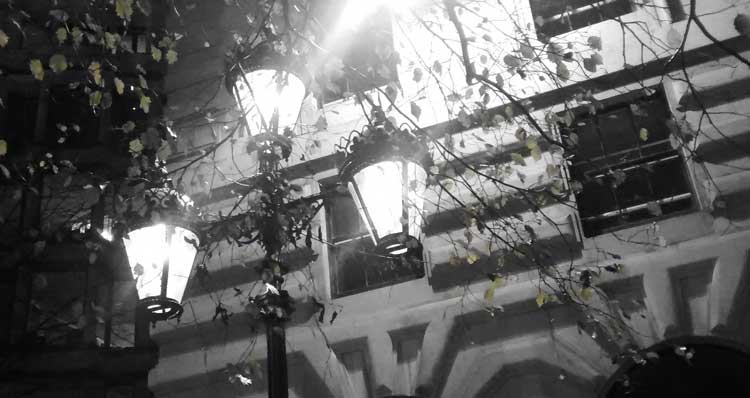 WALK THE SHADOWS OF SPECTRAL LONDON

As the author of the best seller Walking Haunted London Richard Jones is internationally recognised as the Capital's premier ghost walk guide and his reputation for conducting creepy and informative paranormal tours is unrivalled.

He is the longest operating ghost tour guide in London, and has been conduting his dramatic tours of capital's haunted locations since 1982, far longer than any other London walks guide. 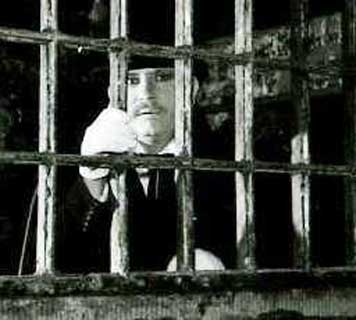 His Saturday night ghost walk offers you the opportunity to delve into the backstreets and hidden alleyways where London's eternal populace is known to lurk and where, every so often, they stir from their slumbers and walk the City's old and deserted streets as ghosts.

And, on this tour, you'll be hot on their trail.

Even the station from which the tour departs has a resident population of departed souls that is known to chill the blood of those who linger in its echoing corridors and tunnels, so you might even encounter your first ghost before you even arrive at the walk's starting location!

THE MAN IN BLACK

Having ascended from the station's depths and emerged into the chill of the London night, you will find your guide awaiting your arrival at the top of the timeworn steps that lead from Exit three. 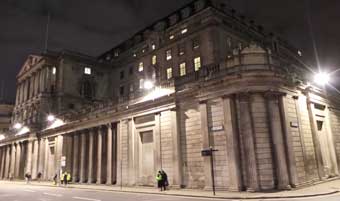 He will be attired in his Victorian undertakers outfit, and will afford you a fitting greeting as he welcomes you and your party to the streets of haunted London.

Once your name has been ticked off the list you will be invited to sit and await the start of the World-famous London Ghost Walk.

And, as you do so, you will suddenly realise just what a special and magical location this spot is from which to set out into the hidden hinterland of haunted London.

For, looking around to take in your surroundings, you will see some truly grand, glorious and illustrious buildings, all of which hark back to a bygone age from London's dim and distant past.

LET THE GHOSTS BRING IT ON

Once our band of spectre hunters has assembled, Richard will call for the group to gather round and, for the next hour and three quarters, you will snake your way through timeless alleyways, tucked away courtyards and hidden passageways where a veritable host of former residents have been just dying to make your acquaintance. 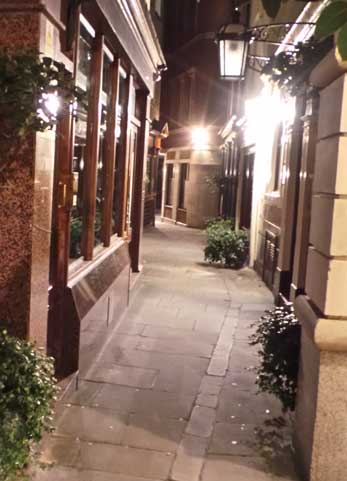 First off, you will duck into a old and sinister court, the entrance to which is so narrow, that people often walk straight past it without even noticing that it is there.

But, it is there and it's the conduit via which we make our first sojourn into the shadow-draped thoroughfares of haunted London.

Here, with the noise of the 21st century traffic reduced to little more than a distant murmur, you will listen as the narrative of your first ghostly tale spirits you back to 16th century London when a particularly evil entity took up residence in this very passageway.

Indeed, it is said that, when the conditions are just right, that same entity has been known to make its presence known to modern-day passersby, some of whom have even felt the dank chill of its foul breath as they make their way along the well-lit street outside.

As the first ghostly tale of the evening winds to a close, you will push on through the sinister alleys that twist their way through historic heart of the City of London.

Within moments, you've squeezed into another ancient court the entrance to which is, unbelievably, narrower than that to the first one! 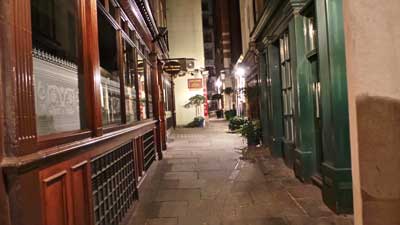 This is a true time-capsule of a place and, as you look around, it will come as little surprise to learn that it was here that Charles Dickens set the creepy opening of his most ghostly of ghostly tales A Christmas Carol.

Indeed, so little changed is this hidden gem that you wouldn't be in the least surprised to find old Dickens himself looking out at you from the ink black windows of one of his favourite watering holes.

However, what might surprise you is the ghostly girl whose pale face has been known to look down from the upstairs window and whose phantom form has been captured on the cameras of numerous participants on Richard's London ghost walk!

Will you too capture her likeness?

CHURCHYARDS, GRAVEYARDS AND THE JAWS OF HELL

With the London night now settling around us we slip through the iron gate of an old churchyard and pause by a line of tombstones to remember the boy who, in the early 19th century was buried in the church that looms over us, only to be brought back from the dead by the nefarious activities of the dreaded body snatchers. 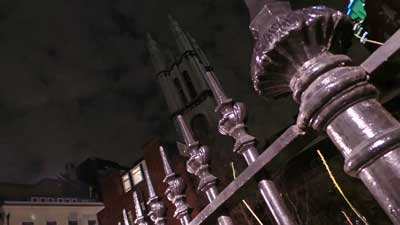 Passing the railings of another graveyard, we head for yet another hidden courtyard where we attempt to rouse the wraith of the waiter who refuses to allow a little thing like death to stop him waiting on tables, even though he's been as dead as a doornail these hundred or so years past.

However, what chills the marrows and tingles the spines of ghost walkers at this spot is not the phantom form of the ghostly waiter but rather the menacing voice that has been known to whisper in their ears and tell them, in now uncertain terms, to "get out of here now!"

The sinister feel of this spooky spot isn't made any less sinister by the fact that we reach it via one of the narrowest, darkest and creepiest looking alleyways it is possible to imagine. Entering it is an experience that, according to a particularly erudite ghost tour participant is a little like stepping straight into "the jaws of hell."

You'll be able to judge for yourself whether this is an apt description.

HAVE YOU SEEN MY BROTHER?

Your ghostly journey continues to a darkly sinister passage where, standing across from one of the City's most important buildings, you will be asked to keep a keen eye peeled for the ghostly lady "dressed all in black" whose sudden appearance has been known to send cold shivers coursing down the spines of even the most fearless. 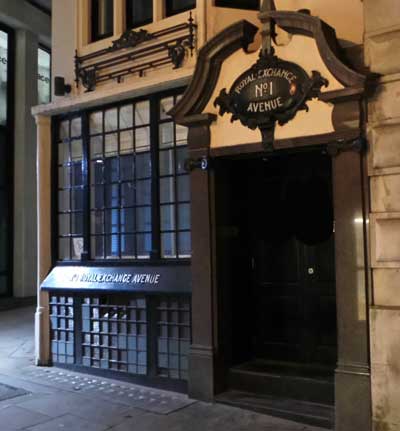 For, she will suddenly be there, a sullen, sanguine spectre who will fix you with a piercing gaze and, looking deep into your eyes, she will ask you the question she has been posing of nocturnal wanderers, "have you seen my brother?"

Why she seeks her long dead brother is the subject of our next ghostly tale and, in all honesty, you may well come away from this one feeling admiration for the woman whose search has been going on, year in and year out, since 1812.

With the night's shadows now all around us, we will criss-cross he centuries in search of a plethora of phantoms.

Some of them have been haunting these streets for as long as anyone can remember. Others have their origins in more recent happenings, such as the girl who decided to take a souvenir of the Halloween Ghost Walk home with her in 2005 and, in so doing, sparked a series of unfortunate events that her family still whisper about in hushed tones today! 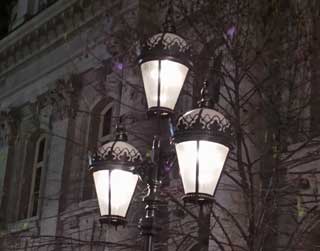 You'll hear about the 19th century bride who still wanders the City streets in search of her husband whom fate and greed have separated her from the whole of eternity to come.

You'll see the hall which is widely regarded as being the most paranormally active building in the City of London, and that's against some pretty stiff competition.

You'll pass the sunken churchyard from which a ghostly slap sometimes echoes in the fading light of the day.

And, if all this doesn't convince you that there are things far beyond our understanding lurking in the darker recesses of the historic City, then how about the old building from which the smell of rotten flesh is said to emanate in the dead of night and the sound of something heavy and cumbersome has been heard being dragged across the cold stone of the basement floor.

A LOCAL RITUAL FOR RAISING THE DEAD

The tour will end in another old churchyard where a solitary gravestone has, over the last few hundred years, managed to embed itself firmly in local folklore.

Indeed, according to the children who once lived nearby, it was possible to perform a ritual that would, so they assured one another on dark winter nights, cause the spirit of the tomb's forgotten occupant to rise from the grave and follow you home.

Could such a thing be possible?

Outside Exit 3 of
Bank Underground Station

When planning your journey to the start of the Saturday ghost tour, please allow 3 minutes for every station you will be through and then add 10 minutes to allow for any travel delays.

On a Saturday night the area that you'll explore on my London Ghost Walk is absolutely deserted. It is, quite literally, a ghost town!

This was the very first walk I ever conducted way back in 1982 when, on a sultry June night, I led my first group ever on a guided walk of London.

Since then I've walked through these alleyways thousands of times and they've never lost their mysterious and spooky ambiance for me.

Indeed, if you were to ask me to name my favourite part of London this little enclave at the heart of the City would be high up on, if not top of, the list.

Now, you might be wondering what this has to do with Charles Dickens?

From when he was a small boy and their servant used to terrify him with tales of horror, he never lost his love of spooky stories.

Of course, he was the man who wrote the most famous, and popular, ghost story of all time, A Christmas Carol.

But he also wrote many other tales of the supernatural as well and he took the art of ghost story telling to new heights.

So by including a ghost walk in my repertoire of Dickensian walks I like to think that I am keeping alive a (if you'll pardon the expression and the pun) medium that Charles Dickens would have approved of.

The Dickens and Shakespeare Tour can be booked as a private tour for your office social, tour group, or even as an outing with a difference for a group of friends or relatives.